Outside the Urbino sports arena, girls of all ages in sparkling gymnastics leotards walk with parents carrying duffel bags of sports gear past tables set up with prosciutto sandwiches to go, candy, and coffee. Anna Rita Calavalle navigates through the crowded perimeter. She walks towards metal gates blocking off the stairs with printed signs that read “Zona Riservata Al Guici” or “Area Reserved for Judges.” Over the loud upbeat music and occasional breaks of applause echoing throughout the sports arena, Calavalle greets several college aged men at the gate who are wearing yellow t-shirts promoting the event with a kiss on each cheek. One of them holds out his wrist and slowly bends it to show her it’s no longer injured. Her face lights up.

Calavalle has come to the arena today to present awards to gymnasts from all over the Le Marche region. She puts on a lanyard with a staff badge and walks down the concrete steps and out onto the floor in the arena. The music stops. Someone hands Calavalle a microphone and she pivots to face the sea of people in the seats above her.

Calavalle, a former gymnast and currently a professor, researcher, and athletics coach with the University of Urbino, often finds herself in this sort of spotlight—addressing the community about some dimension of physical fitness. She’s been doing it actively for decades.

“As an athlete, physical fitness is my life. It’s my work. It is natural to me,” Calavalle explains after the event. “But people who aren’t athletes don’t necessarily think about the importance of movement. Certainly not in their daily lives.” Which is why Calavalle decided to focus her energy and research beyond arenas, competitions, and awards—into a more everyday realm. She is bringing preventive medicine, yoga, and holistic health to Italy’s Le Marche region, one workplace at a time.

At a glance, health and fitness don’t seem to be missing in the Le Marche region of Italy. According to Bloomberg’s 2017 Global Health Index study, Italy is ranked the world’s healthiest country. Factors that played into this decision were lifestyle, diet, “an excess of doctors,” availability of clean water and considered factors such as life expectancy. In Urbino, steep brick streets, tricky walking routes, and a wealth of stairs seem to demand a certain level of fitness and coordination just to get around. Running and biking are popular activities; you might see someone pop a wheelie on their bike at the top of Via Rafaello.  Soccer, of course, is a favorite sport. Recently, Urbino even opened its first CrossFit gym. There is still room for improvement.

“People are so focused on being the biggest and the strongest. Or looking the best. I ask some of my students what sports they participate in and often they will just say ‘the gym.’ Well what does that mean? What are they doing AT the gym?” She laughs. She’s invested in health. She’s invested in wellness. “You have to listen to what your body is telling you.”

“People are so focused on being the biggest and the strongest,” says Calavalle. “You have to listen to what your body is telling you.”

Despite public health insurance policies and a wealth of doctors, the region lacks a push towards preventive medicine.

“Everyone should be interested in preventive health. If not for yourself, then for others. If someone else breaks their leg at the workplace, we are all paying to help that person. Why fix the problem after when it can be too late? You should try to keep it from happening in the first place.”

Calavalle’s pursuit of wellness began early in her life. Her mother, whom she cites as her biggest supporter and inspiration, was always open-minded about her hectic athletic lifestyle. She also supported Calavalle’s decision to study English, which required her to attend a specific school. English language wasn’t too common in the Le Marche region during the ’60ss and ’70s. But Calavalle saw it as a tool to travel, to pursue new things. Her English studies proved to be valuable but not for the reasons she had imagined.

“Life is short,” Calavalle says. In 1980, at the age of 25, she wanted to break up with her boyfriend at the time. He wasn’t well. After the breakup, he pulled out a shotgun, shot her and then himself. He died due to the injury and she was fortunate to survive, albeit with a severe wound to the right side of her face and jaw. Her brother, a doctor in Ancona, made a quick decision to take her to New York to see top surgeons. It wasn’t the English-speaking experience she was looking for.

Following the horrific affair, three operations in New York and, the care of many family and friends overseas, Calavalle returned to Urbino. It was then that she discovered the healing powers of yoga. A decade or two before yoga turned into the competitive Western addiction, Instructor Bharti Roopanand, a woman whom Calavalle refers to as “a touch of India in Urbino,” moved to Italy and brought yoga with her. Roopanand was born in India where she studied Iyengar yoga in Pune, India from the source of the practice, Shri B.K.S. Iyengar. Iyengar yoga prioritizes correct posture to maximize strength, and uses breathing techniques to relax mind and body.

“I had always been involved in sports,” Anna says. “But it was Bharti who helped me realize the importance of listening to your body. It has a lot to say.”

Now, as a coach and professor with the Scienza Motori or Sports Sciences department at the University of Urbino, Anna works with students who are involved in full-time academics in addition to competitive sports. Her interest in wellness extends to them. One of her current students, 23-year-old Michele Antonelli, is on Italy’s national team for the 50km race, placing third in the 2017 European Race Walking Cup.

“Someone who is in such rigorous athletics should be able to do well in their academics as well,” Calavalle says. “I always make sure we can work students schedules so they can accomplish other big things in their lives, whether they are all-star athletes or not.” And Antonelli now has a good relationship with Calavalle because of it. He suffered his own life-threatening scare in 2012. A work-related accident left him in a coma for 3 days. Now Antonelli is working hard and will represent Italy in London in August.

“He stays positive and understands the importance of staying healthy. He likes to share his story now. I think it’s a good message for students, to see someone overcome something like that,” Calavalle says.

Students are a large part of Anna’s life and she often enlists them on her current projects. Meshing sports science with her passion for holistic health benefits, her current goal is to reach out to the community and learn how to improve health habits while they work. Calavalle is working with friends and acquaintances within the police department, the sanitation department as well as the fire department. These are all workers who engage in physical work, often intense and repetitive. A hot zone for workplace injury.

“A lof of the firefighters are stubborn and very proud,” says Claudio Ovarelli, Urbino’s Fire Chief and a close friend of Calavalle’s. “Many of them aren’t too accepting of yoga,” he laughs. He means himself. Firefighters are more interested in team sports, says Ovarelli, himself a champion in the local football team. But the fire department lacks the funding and programs to have an assertive fitness program in place for its firefighters. Many of them have to keep in shape through sports or outside gyms.

Often firefighters are put in acute circumstances where being physically fit is essential to do the job. Recently, the Le Marche area suffered a devastating earthquake and snowstorm damage that required emergency backup from around Italy. These scenarios were hard to imitate in a lab, but Calavalle and her team did extensive fitness testing with full gear, monitoring of vitals, and simulated smoke. Calavalle is publishing her research with recommendations in hopes of getting the department the resources it needs like a tailored fitness program and an on-site gym and trainer.

Where firefighters run into more acutely precarious circumstances, they can identify an injury right away. Calavalle thinks sedentary work might be more of a risk for long term injury. An office is an easy place to develop bad postural habits, eye strain and other mild conditions that can turn into serious problems if not addressed early on. Luckily, her programs at the university administration offices were met with enthusiasm.

“We were excited to have something new to try in the office,” says Susanna Piergiovanni, who works in the Prevention and Protective Services for faculty and staff at the university. She spends most of her day sitting at a desk and in front of a computer. Calavalle explains that her active sitting program introduces the use of an exercise ball instead of a chair for brief periods during the day. It brings postural awareness into employee’s daily routine. It requires sitting on an exercise ball for 10 minutes. It is important that they work up to longer sitting periods to be aware of postural changes and avoid injury, Calavalle says. Unlike the firemen, Piergiovanni now joins Calavalle in yoga outside of work.

Calavalle and her team of university scientists pursue projects in rudimentary stages to get the ball rolling. While it is hard to push ornery firefighters into yoga and demand office workers be diligent about active sitting, the research is valuable. The more feedback she gets, the more influence she thinks she’ll have.

Calavalle often takes her athletics students to the Fortezza Albornoz to train. The grassy park overlooks the walled city of Urbino, a World Heritage Site. Calavalle can’t resist sprinkling tidbits about the city’s history in between stretching and cardio.

“I’d tell them about the history of the city while we were training, but my students would get frustrated and tell me, ‘Anna! We are training hard enough. We don’t need history and language lessons at the same time!’”

She laughs. She can’t help it. Calavalle is always taking the larger, holistic view and sharing it with others. Connecting the city with wellness is her thing. Her way of life and what she teaches seem to parallel Renaissance thinking. The image of the Renaissance man (or Renaissance woman), a multi-skilled and well-rounded person, rings true about Anna Rita Calavalle. She lives by her own humanist philosophy with faith in the individual’s capabilities.

“My objective is to get people to be aware of their habits at work and how they feel. I can’t always be there to make sure they do it. But I can help them realize how small movement makes a big difference. The difference between discomfort and injury: It’s about tuning into your body.” 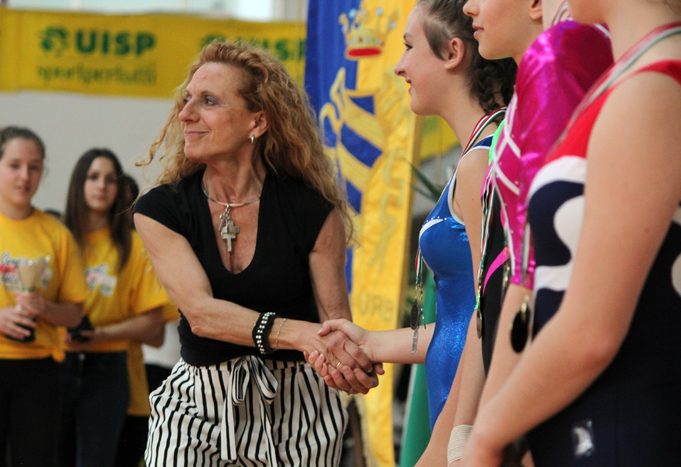 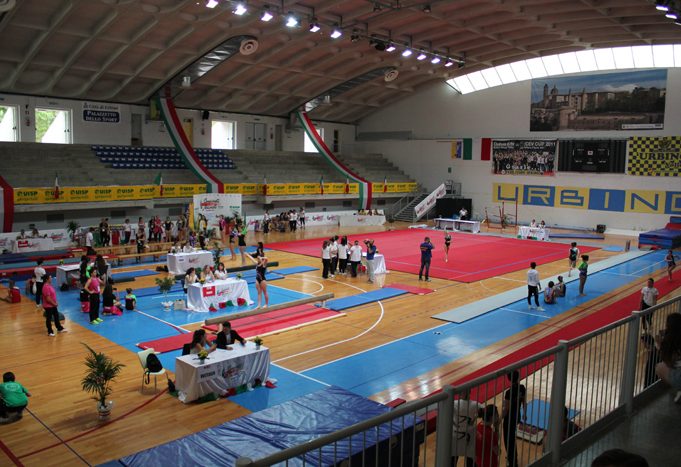 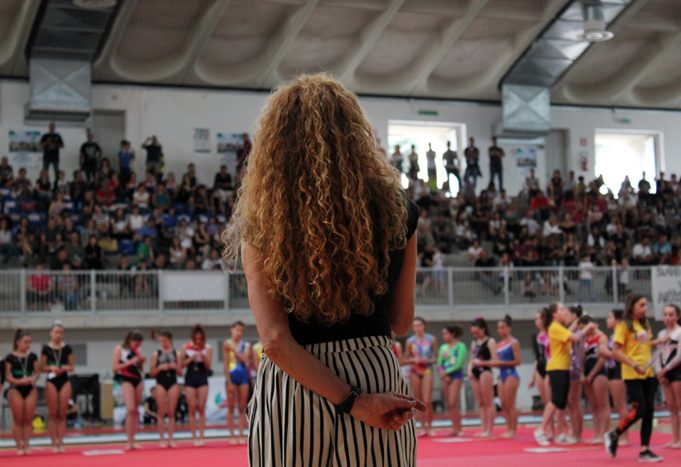 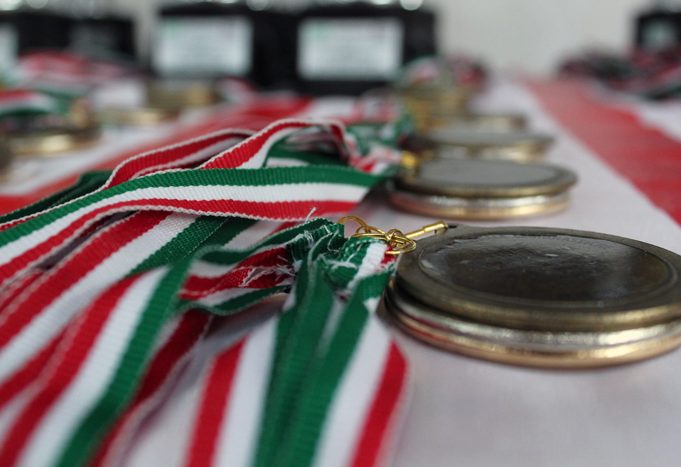 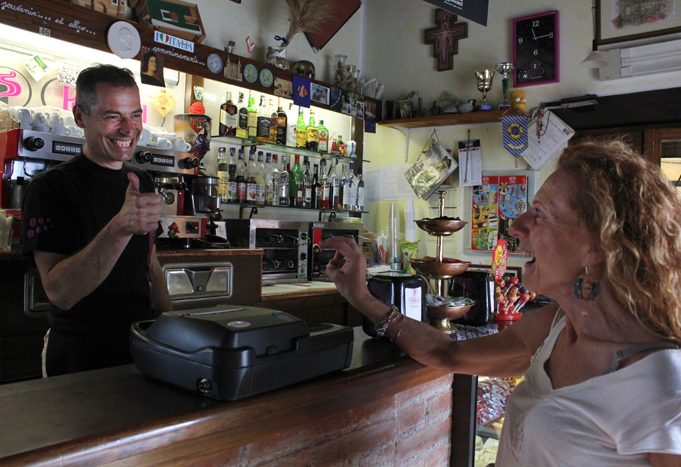 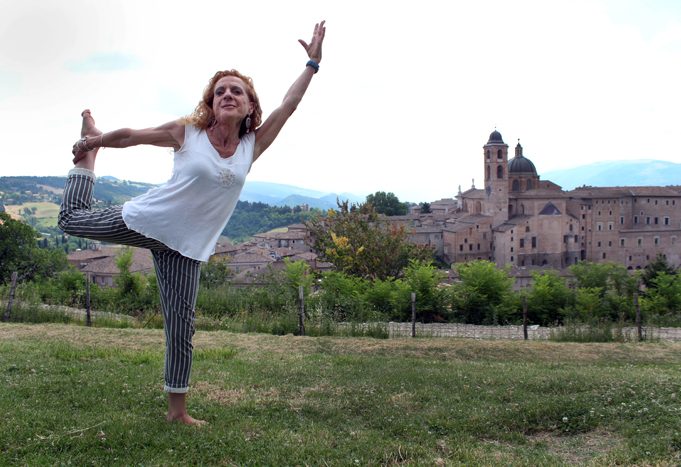 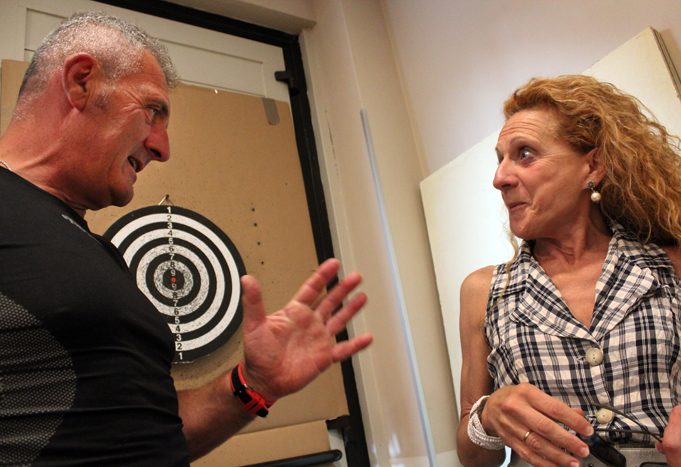 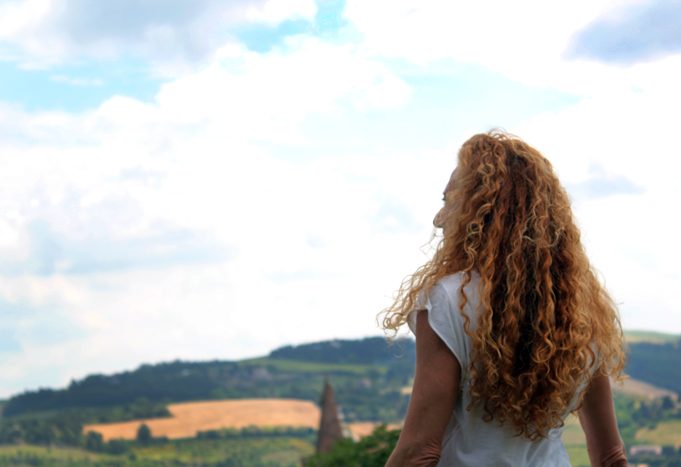 This article also appears in Urbino Now magazine’s Sport section. You can read all the magazine articles in print by ordering a copy from MagCloud.