A family in Cagli has protected a statue for 200 years

CAGLI, ITALY — Directly behind the altar in the Church of San Giuseppe is a wooden box about six feet by four feet in size. Inside this box lies a five-foot tall, wooden statue of Jesus Christ brought to the city in 1503.

Peppe Aguzzi, 76, stands proudly in front of this box like his ancestors in the Confraternity of Santissimo Crocifisso have done for the past 200 years as “priore responsabile della statua” – official caretakers of the statue.

The statue of Jesus Christ was left behind in this Roman city in central Italy by legendary conqueror and politician, Cesare Borgia when he ruled here. And over the centuries the confraternity and Aguzzi’s ancestors have kept it safe and in place through battles, invasions, changes in kingdoms, bishops and popes.

Cagli (pronounced kai-yee) is well off most tourist tracks, but this city of about 4,000 has over 15 churches, most hundreds of years old. Located at the intersection of the

Burano and the Bosso rivers, in Roman times Cagli was a resting point for travelers on the Via Flaminia, an important road from Rome to Rimini on the coast of the Adriatic Sea.

Because of its strategic position on that road, Cagli became fairly wealthy. According to Aguzzi, a majority of the many churches in Cagli were built as a result of the influence by monks needing a place to live and worship.

The Church of San Giuseppe was built around 1000 AD alongside a monastery. The monastery has since turned into residential housing, but the church is still in its original form – about the size of large classroom with a 30-foot, curved ceiling. Paintings of biblical scenes framed by ornate plaster works cover the ceiling.

Confraternities are religious organizations that strive to conserve church property and traditions, but also aid in civic functions. The Confraternity of Santissimo Crocifisso is one of five in Cagli. Historically, each confraternity acted as a form of welfare for the people before the republic was established. Over the centuries their roles included taking care of travelers on the Via Flaminia; supporting families when the main breadwinner passed away; maintaining the walls of Cagli, and even burying people during the bubonic plague – a necessary but risky service.

Today, the Confraternity of Santissimo Crocifisso meets about every six weeks. In additional to guarding the statue and conducting routine maintenance on the church, members organize events including marriages and the four annual saints feast days.

The Corpus Domini festival is one of those. Each year the faithful use flower petals to decorate the streets in religious symbols.

I’ve witnessed and grown with the rituals and beliefs my entire life.

The confraternities are strongly rooted in family tradition, and leadership is passed from father to son – or to nephew if the leader has no son.

“I’ve witnessed and grown with the rituals and beliefs [of my confraternity] my entire life,” said Peppe Aguzzi. “Even when I was abroad or out of Cagli for my studies, I would come back and keep my tradition alive.”

For example, Aguzzi’s son Filippo will take over as the priore responsabile della statua in the future when Peppe decides to pass it on. And Francesco, Filippo’s son and Peppe’s grandson will eventually inherit the role. In fact, at age 11, Francesco is already helping with the statue caretaking.

“There’s not a specific part I prefer about the confraternity, there’s a specific day, it’s Good Friday,” said Filippo Aguzzi. “That day rules all the activity that we carry out throughout the year. That’s the meaning and that’s why we do all of it.”

The annual Good Friday Procession, commemorating the crucifixion of Christ, is now the main event each year for the confraternity. During the procession, Peppe Aguzzi prepares and carries the 500-year-old Christ statue from the large wooden box behind the altar.

On Good Friday night confraternity members carry lamps down the streets. About 100 members walk barefoot and wear caps covering their heads, with only holes cut for their eyes. The lack of shoes symbolizes the punishment they are receiving.

“Caps are worn because the punishment is not supposed to be a public thing,” said Peppe Aguzzi. “It’s a private thing between you and god.”

Participation is popular among the young boys as well as the older men.

“The young feel the traditions as well, especially because they are a family thing,” said Peppe Aguzzi. “It’s not only for my case that my father passed his role to me. All the people who carry lamps during the procession in their confraternity are doing it because it’s a family tradition and they want to be there at that moment.” 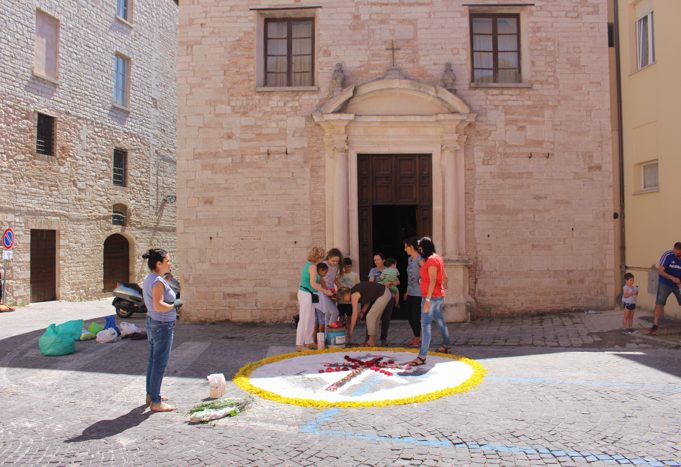 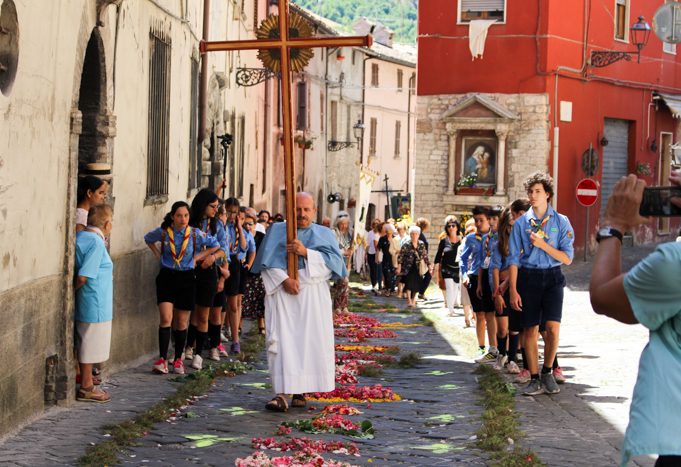 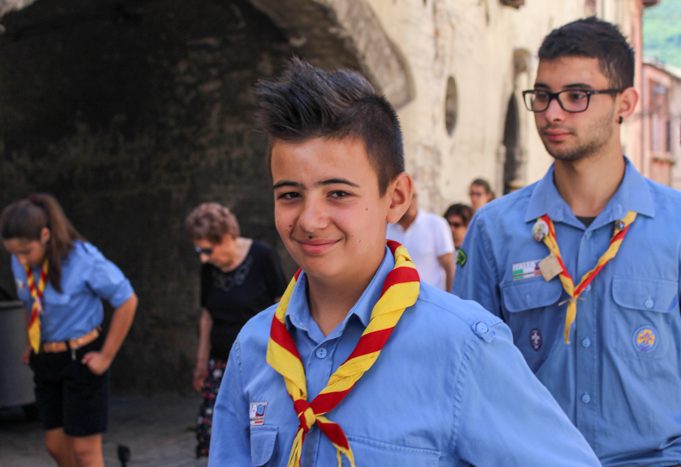 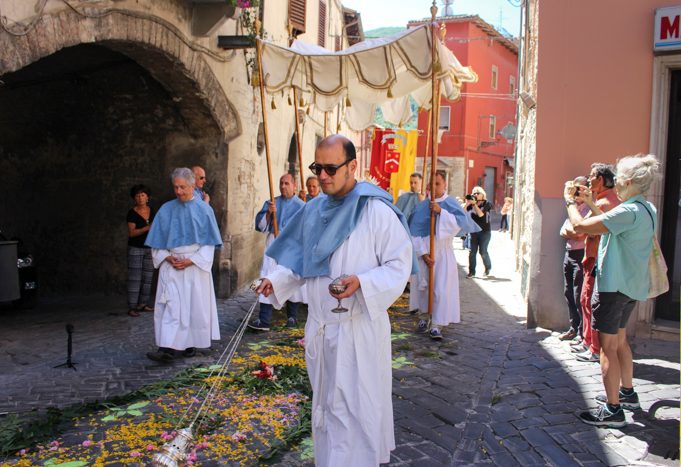 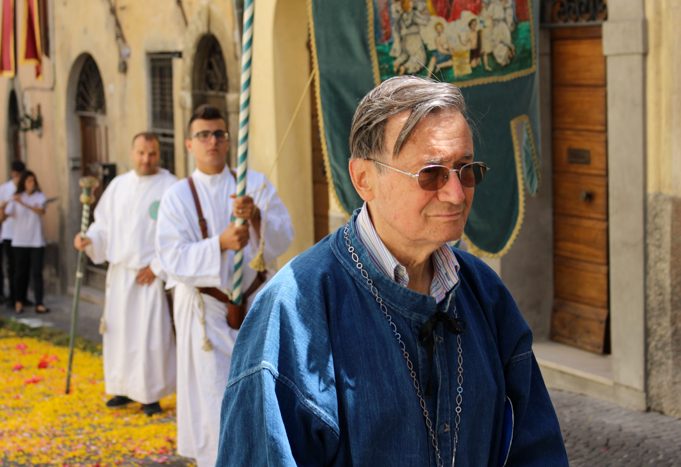 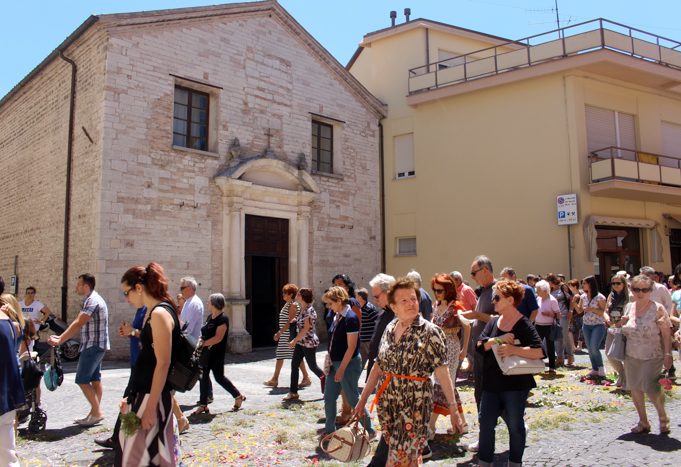 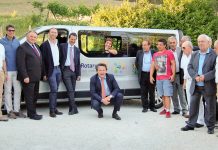