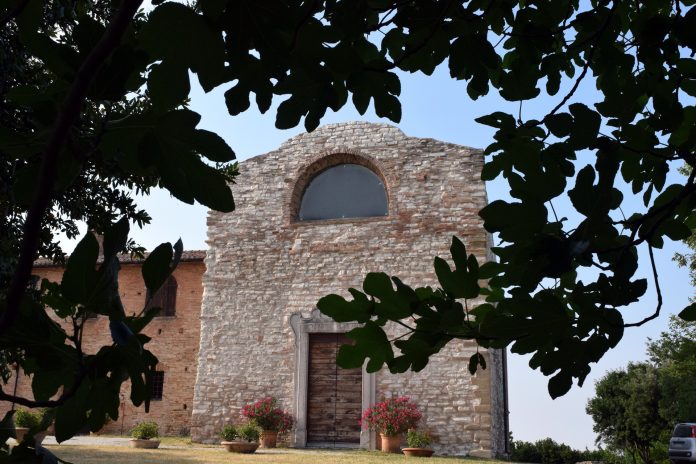 The children of Gino Girolomoni, father of Italy’s organic food movement, are taking his legacy into the future

“We believe we have been true to our commitment, but, my God! How much effort and strength have been required! And where does this strength come from, if not from the food we eat?”
–Gino Girolomoni

Standing tall and proud on top of the Cesane hills overlooking Urbino, Fossombrone, and Isola del Piano, are the offices of Girolomoni Cooperativa Agricola. The exterior of the building, garnished in the white and orange of the Cooperativa’s logo, is as sleek as the inside, which can be seen through glass windows and doors with lustrous metal accents. Upon entering through the sliding glass door, guests and employees are greeted by the aroma of coffee and a secretary with a warm smile.

Upstairs, a young man with bright blue eyes works to preserve the legacy of his late father, Gino Girolomoni, founder of the organic food movement in Italy. Giovanni Girolomoni, 32, is one of three siblings and is currently the president of the Cooperativa. On a shelf behind Giovanni’s desk, photos of his parents, Gino and Tullia, smile over his shoulder. Two large casement windows in the center of one wall offer views of the green fields, golden wildflowers, and the small town of Isola del Piano where the family grew up.

For 40 years the Girolomoni Cooperativa has been producing all-organic products consisting of rice, cereals, flour, couscous, fruit purees, extra-virgin olive oil, and balsamic vinegar. Oltre il biologico, “beyond organic,” is the foundation for the company: organic farming isn’t just a process, but a way of life.

“The Earth is our mother, a mother that nourishes you and you have to take care of her!”
–Gino Girolomoni

The starting point lies within the soil in which the products are grown. The soil is treated as a living organism that deserves tender love and care. From that point forward, in order to successfully grow crops without chemical fertilizer and weed killer, traditional methods of crop rotation are used. “Beyond organic” requires having a love for the land and the people that inhabit it.

“Organic is the starting point, not just the goal,” says Giovanni Girolomoni.

He means that producing organically and without chemicals shouldn’t just happen during the production, but during the storage and processing phases as well. The company uses only electric energy from renewable sources such as photovoltaic panels, a wind turbine, and hydroelectric stations.

Gino Girolomoni grew up in the small village of Isola del Piano and was born into a family of farmers. After suffering some hardships while growing up, he took a short trip to Switzerland. He returned to his home, and in 1971 became the mayor at the age of 23. Upon his return, he purchased a monastery, named Montebello, up on the hills that overlooked his youth.

Step by step, Gino and his wife, Tullia, brought the monastery back to life. During restoration, his observations of nature troubled him; it seemed as though the nature around him was crying out for help. In addition, he noticed the village becoming a ghost town. It occurred to him that families were packing up left and right to move to work in factories. Farming culture was fighting a battle against industrialization, and farmers were losing. Gino decided to bring back the farming culture, and to bring it back with pride.

In 1974, Gino began to experiment with organic farming. He was a deeply spiritual and religious man, and this translated into his work with organic farming. Respectful of the traditions of farming, Gino began farming without chemical fertilizers or pesticides. Even tending to livestock took patience and care, Gino learned: Livestock require free open spaces and a healthy diet. Everything must be grown in its natural cycle. Gino focused on quality, not quantity.

In 1977, Gino enlisted the help of five young men, willing to provide their labor and become a new generation of farmers, and two old farmers for their expertise. When they first started this journey, their two main products were cheese and milk. Gino often wondered if the organic food movement would ever take off.

In addition to the Cooperativa on top of the mountains, the company opened a shop in 1978 in downtown Urbino. The shop was one of the only three organic shops in Italy at that time. “It’s one thing to make a good product, but you also have to sell it,” says Giovanni Girolomoni.

From the beginning, the Cooperativa has been particular when it comes to retail and marketing. Giovanni and his siblings still adhere to these standards, avoiding supermarkets at all costs and selling their products only in completely organic stores. When it comes to promoting their organic products, “it’s not fashion,” says Giovanni Girolomoni.

The company began a new venture in 1989: organic whole-wheat pasta. In addition to traditional farming, this added an industrial aspect to the company. The Cooperativa was the first in the world to experiment with organic whole-wheat pasta. They use non-genetically modified wheat, and crossbreed different varieties such as emmer, which is an ancestor of spelt; cappelli, which is a durum wheat semolina grown exclusively in the hills of the Marche region; and graziella, which was brought to Italy in 1970 after it was found in an archeological dig in Egypt. All pasta is produced in their fully organic factory.

While the journey wasn’t always smooth, it was worth it. The Cooperativa had some issues with the law for 17 years; since organic pasta was new, it fell under different regulations than traditional pasta. The business persevered, and with the help of their partners in Germany, they didn’t suffer while toying with legalities. Organic farming was new and innovative, and it was difficult at first to open up the minds of the public to understand this different but more natural way of producing goods.

With the Montebello monastery at the heart, the Girolomoni complex is now an empire wedged between the peaks of the Republic of San Marino and Monte Conero, with a winding road leading to each element—the pasta factory, the modern office building, the monastery, and even a locanda.

There’s no doubt that Gino Girolomoni, who died in 2012, left his mark on not only the region, but also the world, and that his children are working hard every day to preserve the legacy of their father.

The Cooperativa currently exports pasta to 24 different countries, receiving 85 percent of their revenue from these exports. Germany, France, and the United States are the biggest importers. In France and the U.S., the pasta is sold under the name Montebello; in Germany, it’s called Biogourmet and Rapunzel.

“You buy it because you believe in it,” says Giovanni Girolomoni.

As for the future, the Cooperativa is continuing to grow. Within the past five years, they have increased production by 50 percent and now have 20 farms. The Cooperativa has visions for a new project in 2019 to build their own organic mill. In the previous years, they had a small mill but it couldn’t keep up with the volume of their products, so they have been working with four mills in Italy. Now the idea is to build their own organic mill, owned and managed by farmers in a completely organic supply chain from field to table. “It will close the circle completely,” says Giovanni Girolomoni.

Inside the pasta factory, the climate resembles a tropical rain forest, steamy and warm. The hefty metal machines roar as they produce their organic wheat pasta and organic ancient wheat pasta. The long-pasta machine is busy churning out spaghetti and linguine, while the short-pasta machine generates penne, maccheroni, and farfalle. Pastas of various shades of gold and bronze spew from machines during processing. Long strands of pasta drape down like a curtain as they start to dry. The Cooperativa has a special secret to drying their pasta. While long pasta typical dries for six hours and short pasta dries for four, the company doubles the drying time for both to enhance the natural flavors of the earth. Factory workers in crisp white uniforms, complete with the bright orange Girolomoni logo, work carefully and efficiently to process and package high-quality organic pasta.

Maria Girolomoni, the daughter of Gino and Tullia, started to manage the locanda, or inn, about five years ago. She noticed that it needed taking care of and took matters into her own hands. She focuses on hospitality and communications, as well as planning cultural events held at the monastery. The locanda is in its peak during the summer and receives guests from all over.

The locanda features 11 rooms for guests and about 60 seats, indoor as well as outdoor, for guests to dine while taking in panoramic views ranging from the sea to the peaks of mountains. The smell of fresh ingredients and the sizzle of pans seep out from the kitchen. The locanda offers a seasonal menu complete with traditional yet creative organic cuisine, all sourced from local, organic products. Beginnings include dishes like Uovo in camicia su zuppetta di ceci, which is essentially a poached egg over zucchini and chickpeas, while main dishes revolve around the different types of Girolomoni pasta.

To Maria Girolomoni, the locanda is essential to the Cooperativa. “If people weren’t allowed to stay here and eat the food, they wouldn’t be able to understand the whole idea of the business.”

Giovanni Garbugli of Urbino’s Sugar Café also believes that only by eating Girolomoni’s products will consumers truly understand the company and its values. An ideal customer for the Cooperativa is one who practices the same beliefs that the company holds. “I am proud of the company because we know it’s a product of the territory, it gives work to people we know, and they confirm the high quality standard,” says Garbugli. He serves his customers the pasta for three simple reasons: “Flavor, taste, and consistency.” The pasta is so natural, he says, that you can taste the Earth. 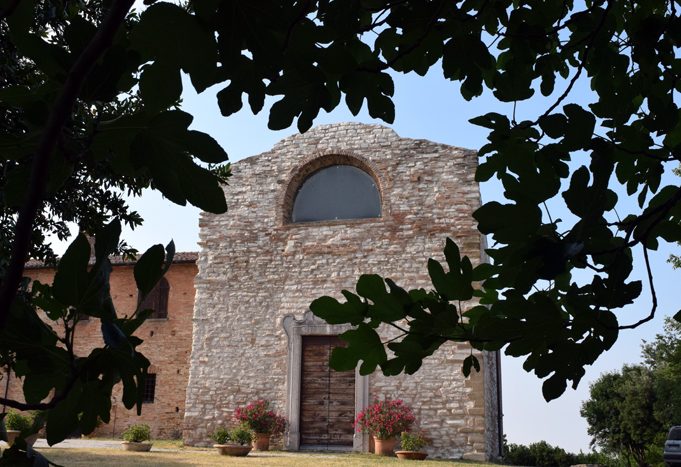 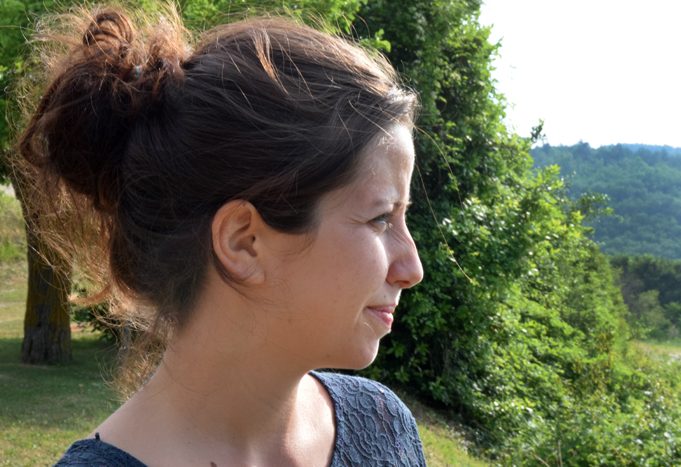 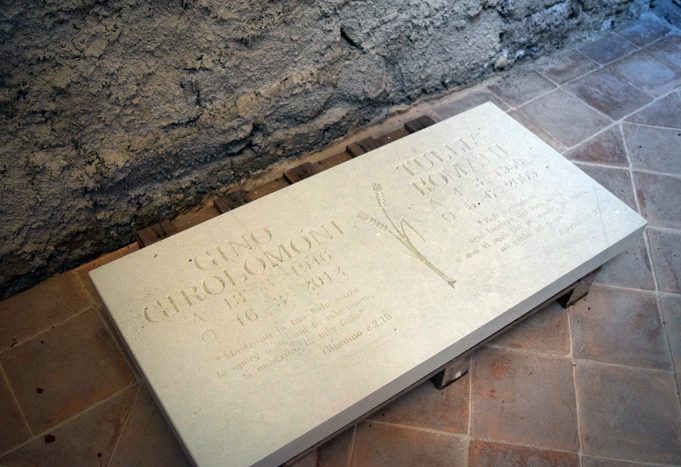 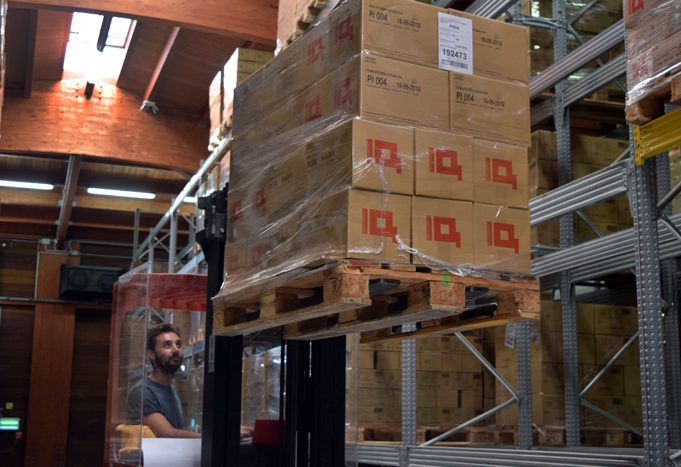 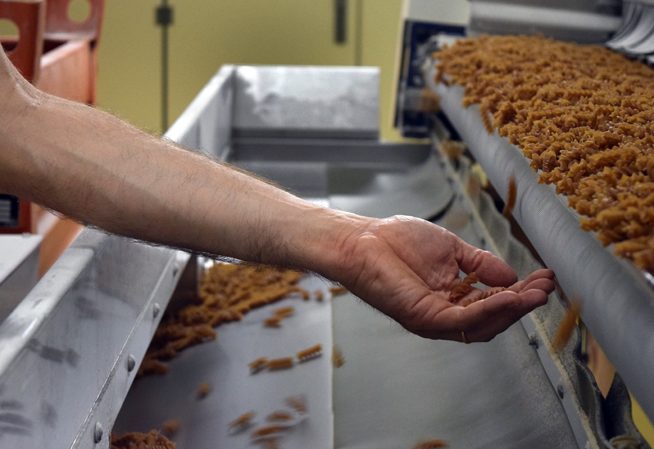 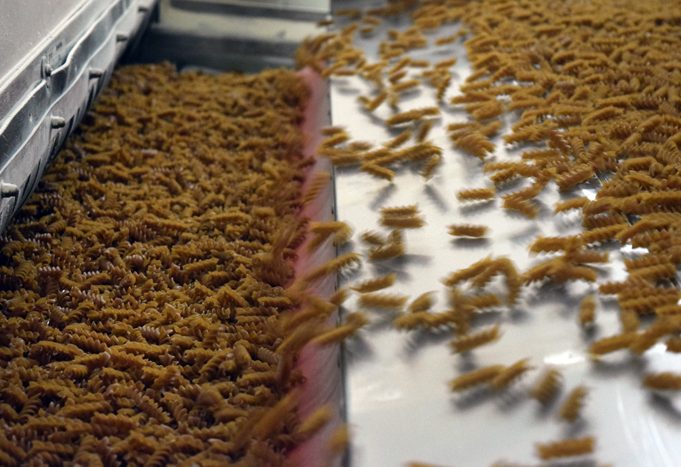 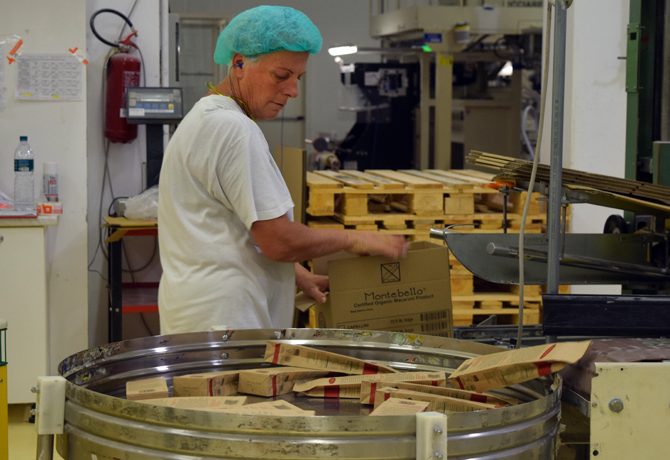 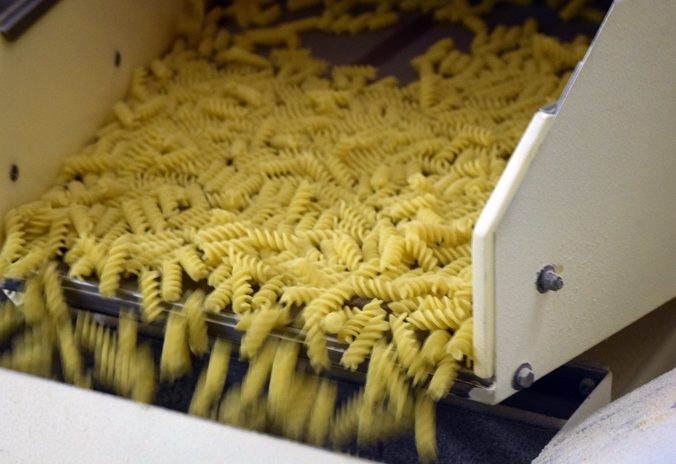 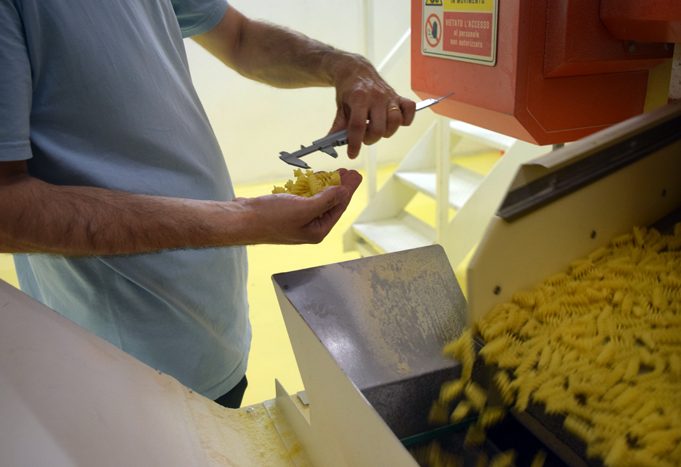 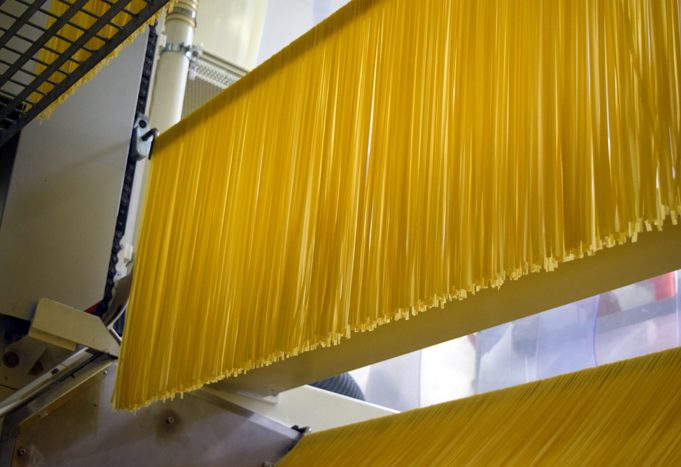 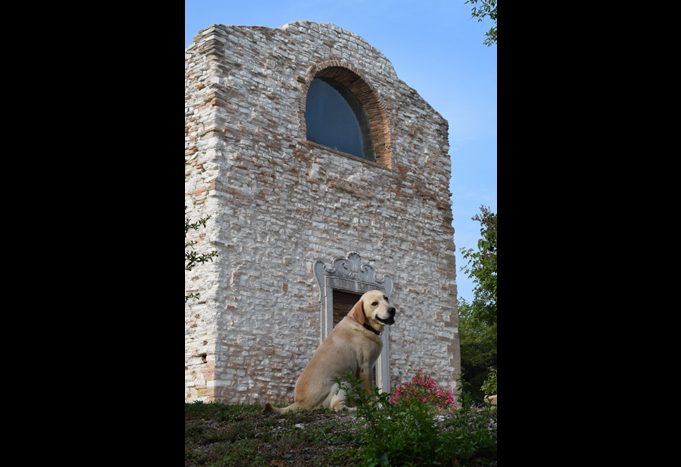 This article also appears in Urbino Now magazine’s Mangia Bene section. You can read all the magazine articles in print by ordering a copy from MagCloud.