Embracing the community through nightlife

The door is wooden and chipped, marking decades of use. The dim lanterns on either side illuminate two metal Bs on the door, now ajar. Inside, Sandra Lannes wipes down the scarred counters and carefully places clean glasses in the cupboards. The room smells faintly of wood and sweet alcohol. A woman in her mid-twenties enters and orders wine at the bar, followed by a young couple ordering mojitos.

A delicate light from the street casts a glow onto Lannes’ face as she welcomes the customers in Italian that’s braided with laughter. It’s 9:00 p.m., and Urbino’s infamous Bosom Pub­–arguably the heart and soul of university life in this town–is now open.

Bosom Pub has been a staple in Urbino since Stephano Galli opened it in 1985. As tradition continues, so does Bosom. Urbino itself is lost in time, intertwining its Renaissance history with modernized aspects such as Bosom. This cultural melting pot has always allowed students of all nationalities to be a part of one accepting community, at least for a few hours each night. Which begs the question: What makes this pub so special?

Lannes, a former psychology student, ponders the same question. “I wish I knew why Bosom was so popular, then I would have the magic formula to work here,” she says as she stirs the caffé that bartender Patrick Volpini brings her.

Lannes didn’t always dream of managing a pub. After arriving in Urbino in 1994, her world shifted.

“In ’95 I met Stephano Galli. We fell in love, so my history changed pages completely. Instead of working as a psychologist, I stayed here. Now I do psychology at Bosom. I love the students,” she says as she waves at customers trickling in.

By 11 p.m., the sun has long settled behind the mountains. The dimly lit room begins to smell of tobacco and cologne. The vibrating bass from the speakers creates waves in the drinks lined along the bar. Voices in Italian, English, and Spanish ring through the once-silent but now deafening room, creating a pleasurable cacophony of different cultures, ages, and backgrounds.

Back at the bar, Volpini carefully pours two glasses of a local red wine, Sangue di Giuda—or “Blood of Judas.” Volpini believes Bosom’s appeal is the sanctuary it provides.

“It is sort of a meeting place,” he says as he places the glasses of wine on a tray. “People know about this place and they come here to meet people. It is a tradition. It is a historical place.”

It’s 9:00 p.m., and Urbino’s infamous Bosom Pub­–arguably the heart and soul of university life in this town–is now open.

Volpini has worked at Bosom for five years and is an Urbino native; as a result, many of his customers are old friends. “Seeing the people and talking about their day and joking with them is fun,” he says before swiftly delivering the drinks to their rightful owners, promptly returning with an empty tray.

As more customers enter, the air grows thicker. Beams of light dance around the room, and amid all the people and chaos, Lannes never ceases to smile.

Bosom’s name comes from the literal association with a mother’s bosom, specifically, intending to be a warm and welcoming place. The comforting atmosphere is what Lannes enjoys about the pub.

“It is like a family,” Lannes says. “I am the mom, sometimes I’m good; sometimes I’m very, very bad. They bear me,” she says, glancing at Volpini for confirmation. Volpini glances back, nodding his head through laughter.

Alessandro Casolari, 23, is a student at the University of Urbino. For him, it is the music that makes Bosom so memorable. Unlike the electronic music played in many other bars in Urbino, Bosom’s is a mix of genres from American pop to classic Italian tunes, which entices Casolari.

Casolari has been frequenting Bosom since the first month he arrived in Urbino from Milan three years ago to study languages and culture.

As he carefully rolls his cigarette and blows out a long, slow puff of smoke, he explains his fascination with Bosom further. “Urbino is a little place… In just one week, you can learn the best places to go at night. Bosom is one of them.”

A wide variety of students come to Bosom to experience its atmosphere and music. Italian, Spanish, Iranian, Korean, Vietnamese, and Chinese students fill the pub night after night.

“You have the opportunity to meet many students and people there,” he says as he runs his fingers through his hair. “I have met some cool people. I really like it.”

Casolari is known as a wanderer to those who have met him. While unpredictable, his nights often end with the same routine: him at Bosom surrounded by his closest friends, such as Patrick “Paddy” Riordan, an Irish student studying languages at the University.

“A large amount of the people I know I’ve met in Bosom,” Riordan says with an embarrassed grin, as if to say most of his friends are Bosom regulars. “I know that everyone I know will be there. It’s very comfortable as well.”

Riordan, 20, has spent the past nine months in Urbino. He celebrated his birthday at Bosom the first month he arrived in Urbino and has been a regular ever since.

“Every time I leave my house, I pass Bosom… I often plan on going somewhere else, but I usually end up at Bosom and stay there,” he says while opening a sugar packet, slowly pouring it into his caffé, stirring gently.

As a speaker of three different languages including Italian, English, and Spanish, Riordan sees Bosom as a cultural experience.

While pouring his caffé over ice, Riordan reminisces about his enthrallment with Bosom. “It’s kind of a meeting point for foreign students, which was one of the things, at the start, that I didn’t like. I didn’t want to spend my time with people who weren’t Italian… Now, I know the staff and I like it.”

As he became consumed with the culture of Urbino, Riordan found himself enjoying it more and more. With a sip of his now-chilled drink and a deep breath, Riordan says, “In un mondo grigio, Bosom splende”—“Bosom’s splendor stands out in Urbino.”

It’s 1 a.m. and Bosom is nearly unnavigable. People pack the pub wall-to-wall and flow out into the street. The flashing neon lights illuminate the sea of people, changing from orange to green. The dance floor rocks like an ocean, lifting up one person at a time.

Eventually, the crowds slowly dissipate. Stragglers are left saluting their friends, and couples mingle in the streets.

Once the doors are finally locked around 3 a.m., Lannes, Volpini, and the rest of the Bosom family clean up, preparing for the next night. They hose the streets off and wipe the walls clean, erasing the night’s fun. With a flick of the light switch, Bosom becomes still once again. 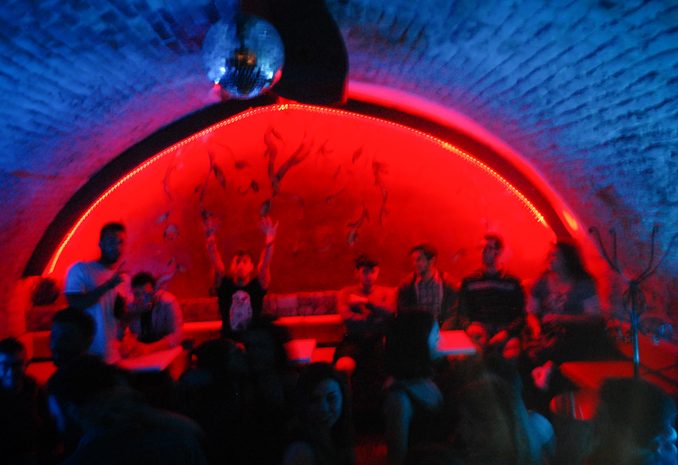 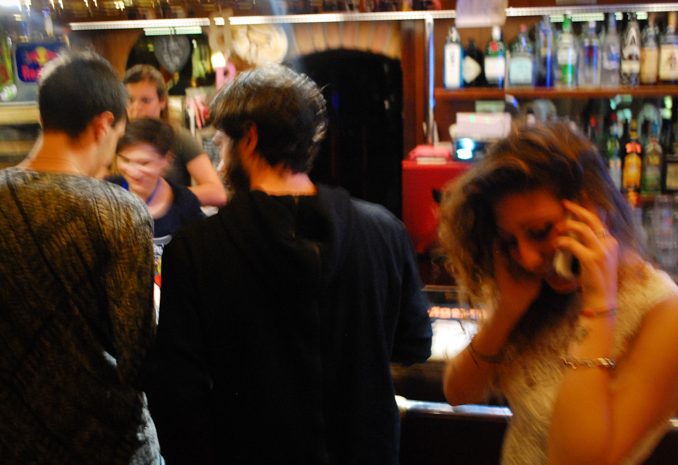 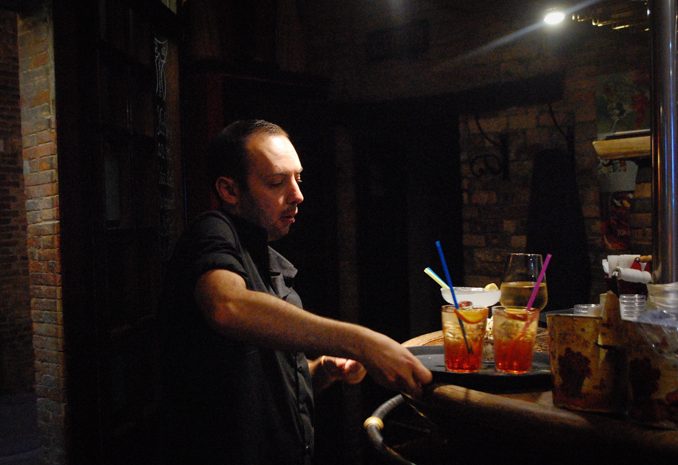 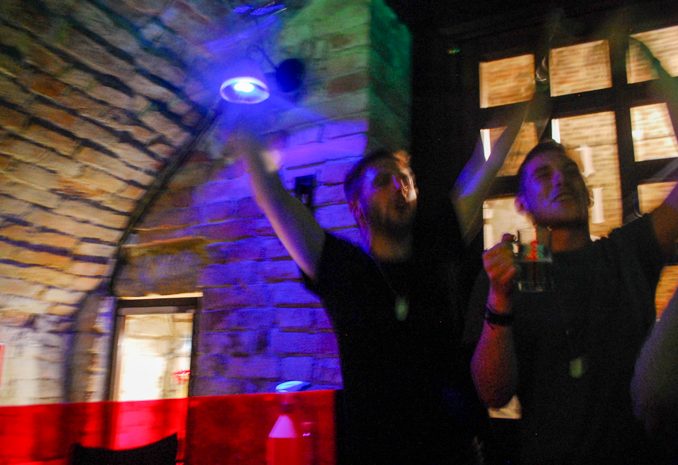 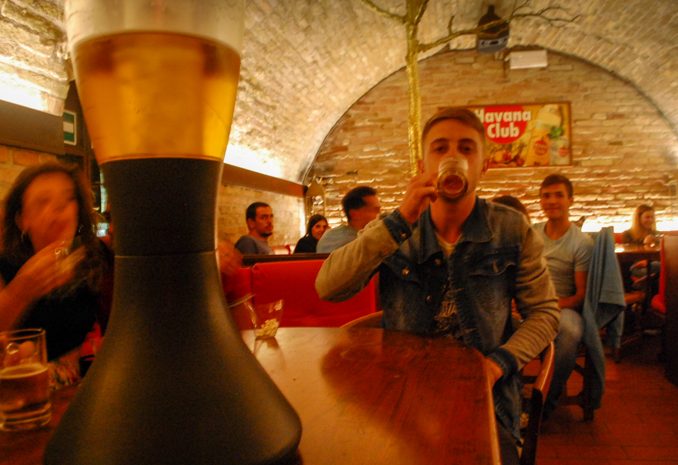 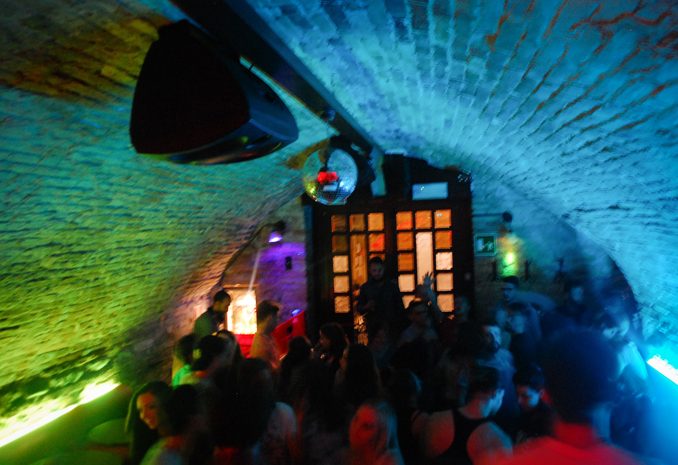 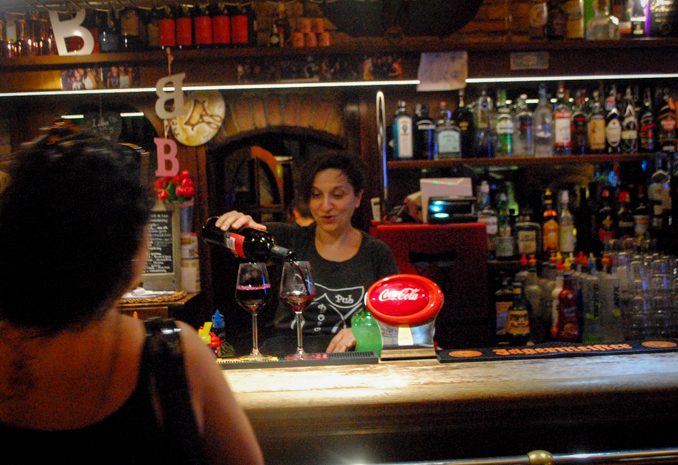 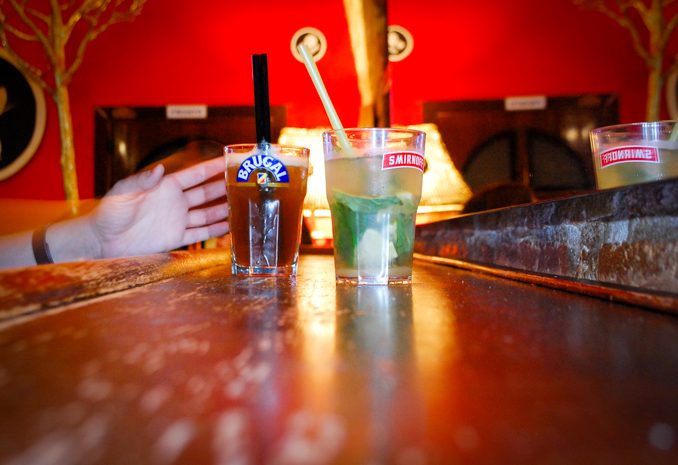 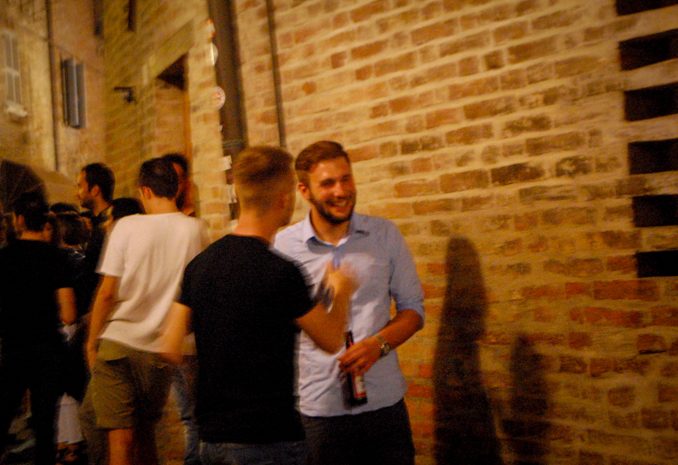 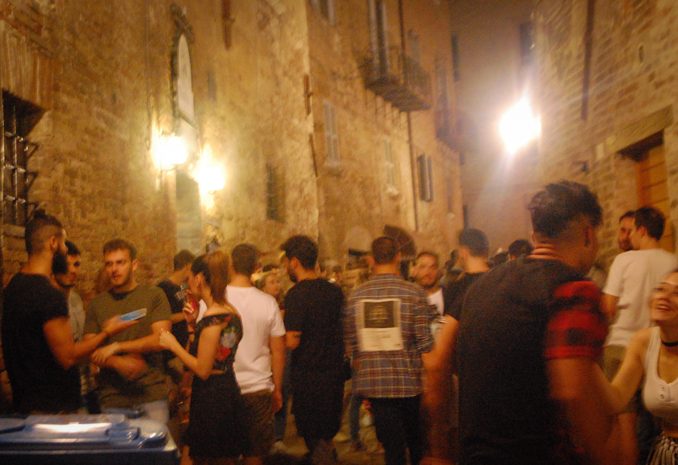 This article also appears in Urbino Now magazine’s Urbino Centro section. You can read all the magazine articles in print by ordering a copy from MagCloud. 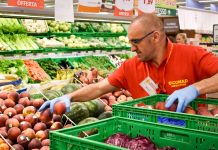 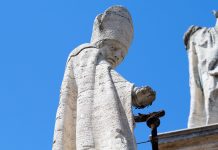