It is the ultimate family emblem, painted in 1475 for Pesaro’s most influential Renaissance clan, la famiglia Sforza. Inside a hand-carved, gilded frame, dozens of small oil paintings—depicting symbols of the Sforza’s valor—ring a life-sized representation of the coronation of the Virgin Mary. In one corner, San Terenzio—Pesaro’s patron saint—holds a model of the Rocca Costanza, a fortress conquered by the Sforza. Paintings of other saints special to Pesaro trail along the bottom of the woodwork in tribute to the family’s Franciscan faith. In the center, a dove flies above a sky of lapis lazuli, the most luxe pigment of the era and a reminder of the clan’s wealth. Behind the coronation is a painting-within-a-painting of a hill in Gradara, a neighboring city also under the Sforza lordship, placing a scene usually occurring in Paradiso in family territory.

The altarpiece by Giovanni Bellini, known as La Pala di Pesaro or La Pala dell’Incoronazione della Vergine—“the Coronation of the Virgin”—opens a temporary exhibition at the Civic Museum of Pesaro called Rinascimento Segretto. Translating to “Secret Renaissance” in English, it is a three-part love letter—in three Marche towns: Pesaro, Urbino, and Fano—to the lost arts of the Renaissance.

Curated by the renowned art critic Vittorio Sgarbi, the exhibition features art from usually closed private collections. The show includes works that Sgarbi himself has gathered over the years, as well as rarely seen 16th century paintings and sculptures by both famous and unknown Renaissance artists—many of whom were pupils of the giants we have come to think of when we hear the word “Renaissance.” Each participating city has its own theme: Venetian influence in Pesaro, artistic lineage in Urbino, and sculpture in Fano. This showcase of unconventional art is an essential piece of the Renaissance puzzle for seasoned art historians and amateur enthusiasts alike.

“The works of the Renaissance are the highest of all Italian civilization and art,” Sgarbi said in April in a video interview with local news outlet Air Urbino. “The secret Renaissance is difficult to show. There was a complex search for both the works and the authors that make this show at a sophisticated level. Along with Raffaello [Raphael in English] and Perugino you will come across many anonymous artists, achievements of recent critical research, or artists who are known but are still under study. The secret Renaissance, in its entirety, becomes a revealed Renaissance for the visitor.”

The secret significance of Bellini’s painting lies within what Italian museum system representative Michela Gaudenzi calls the work’s “metaphysics”: Bellini’s use of geometrical, or linear, perspective. Rows of windows and buildings vanish into verdant hills. A painting-within-a-painting breaks up the foreground of the biblical scene from the background of Pesaro. These geometric forms demonstrate Bellini’s masterful knowledge of how to make a painting appear multi-dimensional. Next to the flattened triptychs of the preceding era, Bellini’s work looks as shockingly new as Cubism.

Next to the flattened triptychs of the preceding era, Bellini’s work looks as shockingly new as Cubism.

In addition, Bellini’s personal story epitomizes one of the most important elements of becoming a famous artist: dumb luck. Giovanni Bellini had superior painting skills to his brother Gentile, but the latter was more popular during their careers in Venice.

Gaudenzi chuckles when asked why some artists become revered while others fade into the background of an artistic movement.

“It’s hard to interpret to you, but I’ll try,” she says, walking over to the other work by Giovanni Bellini on display in the room, La Testa del Battista, a circular portrait of Saint John the Baptist’s decapitated head commissioned by the Duchess of Urbino. “There are some curators that have economic reasons to push certain artists. History has given the opportunity to some artists to become more famous. Sometimes, many artists have not been understood. This is the case of Giovanni Bellini.”

Gaudenzi says that while Giovanni was hired by the Sforza family, Gentile was hired by the Dukes of Venice and other government officials. The cred of being the official portrait artist for the authority of a city so important as Venice boosted Gentile’s name—and exaggerated his artistic abilities. However, history has instead favored Giovanni. While lesser-known during the time he was painting, Giovanni’s technical skills and innovative designs have landed his paintings in the Vatican Museum in Rome and his name in the books.

The secrets of the Renaissance continue next into Urbino, where Sgarbi juxtaposes famous artists of Le Marche’s principal schools of art with their near-anonymous students and contemporaries.

On one crimson-painted wall of the main room are two sketches by Raphael, surrounded by etchings and paintings of the pupils on whom he made his mark. Raphael, born in Urbino, was one of the Big Three painters that characterize the Renaissance, along with Leonardo and Michelangelo. Urbino’s Palazzo Ducale, or Ducal Palace, is now a museum with permanent pre-Renaissance and Renaissance art collections.

Paolo Perugini, a docent at both the Palazzo Ducale and the Civic Museum in Pesaro, explains the importance of highlighting the works of the students and contemporaries of famous painters, especially during the Renaissance period.

“These painters learned the same techniques as the famous artists. It was very important to pass the techniques of painting—especially in the Renaissance—through the relationship of master and pupil,” he says. “Painters moved from city to city, inspiring and learning from others, and spreading technologies and ideas. People know the art of now-famous painters through the engravings of others.”

In Fano, Sgarbi’s display uncovers yet another secret of the Renaissance: sculpture and ceramics. Often forgotten or overlooked due to the grandeur of large-scale oil paintings and celebrations of humanism, workshops of metalsmiths and sculptors flourished after the turn of the 16th century.

In the video interview in April, Sgarbi discussed how the mentality of the era’s celebration of the human form impacted the return to classic Roman sculpture techniques and subjects.

“Fano used to be a great Roman city,” he said. “It is my feeling that the Renaissance changed part of sculpture, going back to the sculptures that are the most succinct and classic and antique.”

At the Fano exhibit, two rows of bronze and marble sculptures perch on crimson crates, dominating the main room. A golden chalice and bejeweled cross start off the procession, followed by busts of biblical characters and other human figures. Across a courtyard, hand-glazed ceramic plates and pitchers are on show in mirrored boxes. The rose-tinted light from a stained-glass window illuminates all the brush strokes and textures of the traditional majolica tableware. The pottery is adorned with flowered strokes and rich colors on a white background, a design technique developed in the Renaissance.

“It is important that when you study the secret Renaissance that you see Fano,” Gaudenzi says. “Sgarbi’s whole point was to see the exhibit in its entirety in order to get a complete idea of the arts and time. Fano pays tribute to sculpture and ceramics, which are often forgotten next to the great painters of the Renaissance.”

Possibly the best-kept secret of the exhibition is the curator himself, who—while infamous for his online and on-air eruptions of ego and opinion—has been highly selective of his words and publicity regarding Rinascimento Segretto.

However, one thing that the outspoken art critic has repeated time and again is the importance of the settings of the three shows to the exhibitions themselves. Sgarbi decided to house all three legs of the exhibits in former ducal palaces, explaining that there is a natural connection between the art in the secret Renaissance exhibits and the rest of the art shown in the museums, as well as the museums themselves. The locations, he says, allude to the tradition of artistic patronage typical of the Renaissance.

“This [choice of location] was done intentionally so that these pieces with a little misunderstanding could exist among the halls of the greats of the Renaissance,” Sgarbi said. “I wanted to bring alongside the mysteries a celebration of the Dukes—a central theme of the Renaissance and of Urbino.” 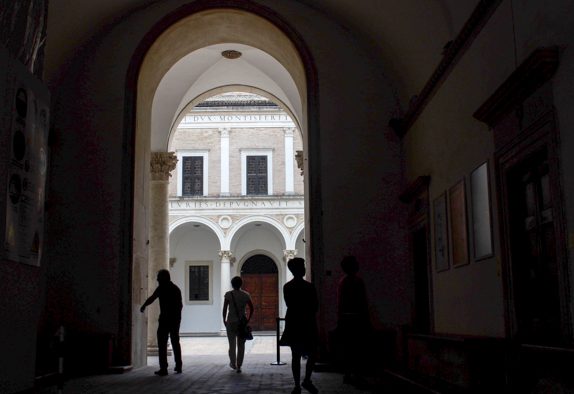 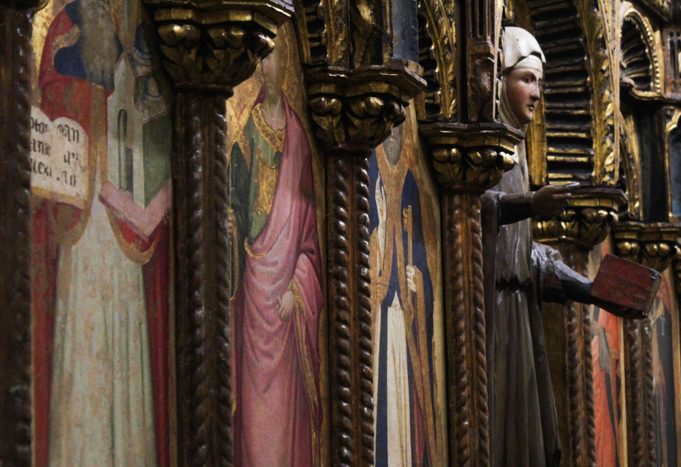 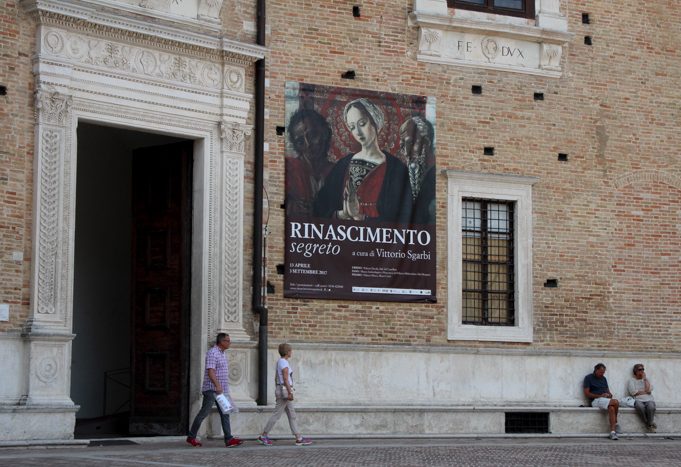 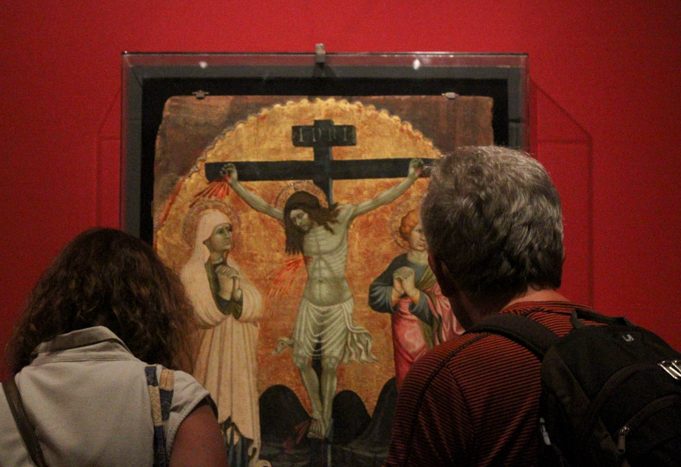 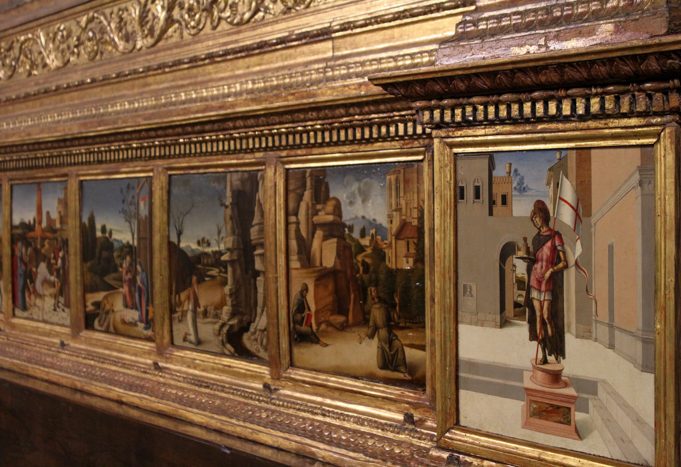 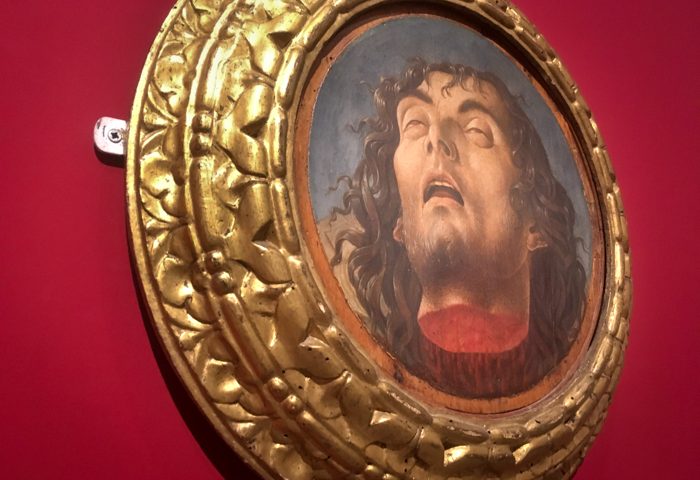 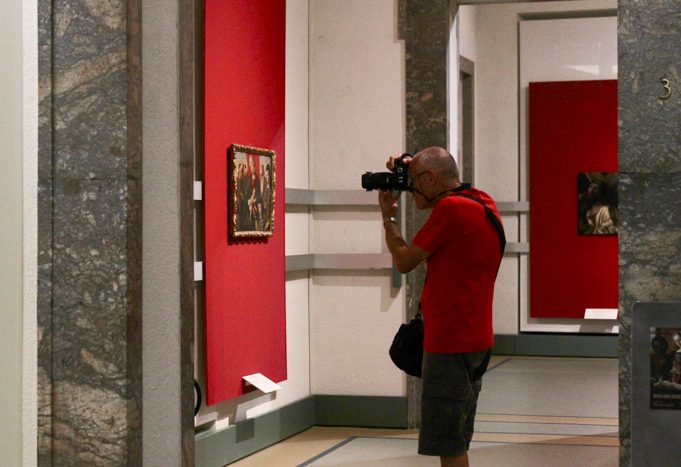 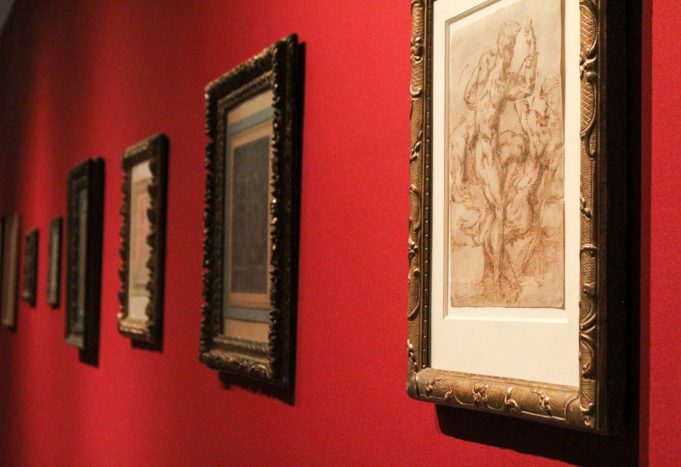 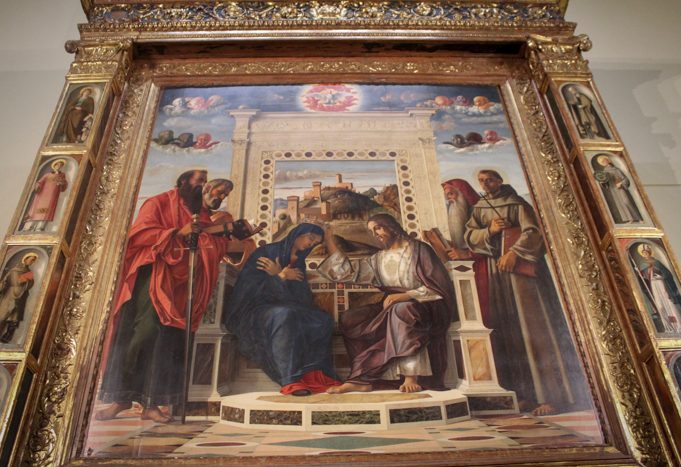 This article also appears in Urbino Now magazine’s Arte e Cultura section. You can read all the magazine articles in print by ordering a copy from MagCloud. 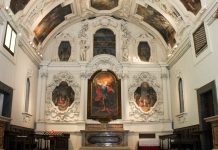 ABOUT US
Between May 26 and June 23, 2017, 40 student journalists and storytellers developed multimedia journalism stories to document the people and places of Urbino and the Marche Region of Italy.
Contact us: sanderson@ieimedia.com
© Copyright 2017 - ieiMedia